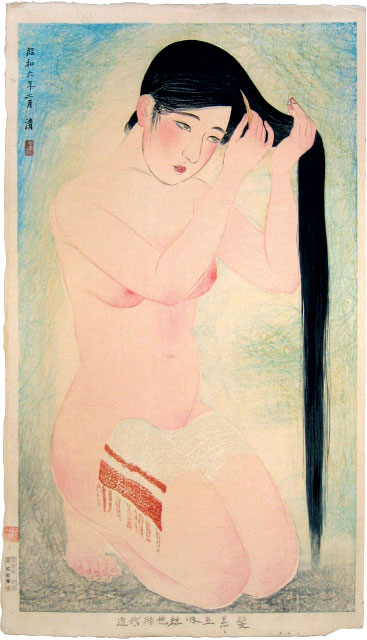 Kobayakawa Kiyoshi moved to Tokyo from Fukuoka Prefecture as a teenager. He studied under Kaburaki Kiyokata (1878-1972) and exhibited his Japanese-style paintings with his fellow-students at Kyodokai (Homeland Society) exhibitions. He won awards at national competitive exhibitions such as Teiten and Bunten. In the 1920s Kiyoshi became interested in ukiyo-e, and began collecting prints in order to study them. He produced a total of thirteen prints in his career, twelve of which were included in the 1936 show at the Toledo Museum of Art, Modern Japanese Prints. This series, Styles of Contemporary Make-up, includes six designs.