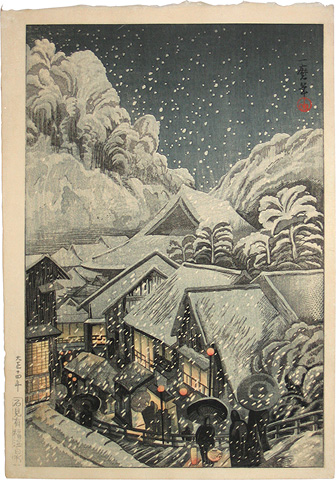 Many artists of the first half of the 20th century drifted back and forth between the two poles of sosaku-hanga and shin-hanga. Oda Kazuma was an artist who was able to produce notable works by both means; that is, with a publisher or independently. Born in Tokyo, he studied Western-style painting with Kawamura Kiyoo (1899-1934) and lithography with Kaneko Masajiro. Kazuma worked primarily as a lithographer, but he was also an ukiyo-e enthusiast, publishing two books on the subject. He was a contributor to Hosun ca. 1909-11, an art magazine co-founded by Ishii Hakutei (1882-1958); a founding member (and only lithographer) of Nihon Sosaku-Hanga Kyokai (Creative Print Society) in 1918; Yofu Hangakai (Western Style Print Society) in 1930; and Nihon Hanga Kyokai (Japan Print Association) in 1931. And yet, with all his sosaku-hanga associations, in the 1920s he designed six shin-hanga type woodblock prints published by Watanabe.