Fresh from the Bath 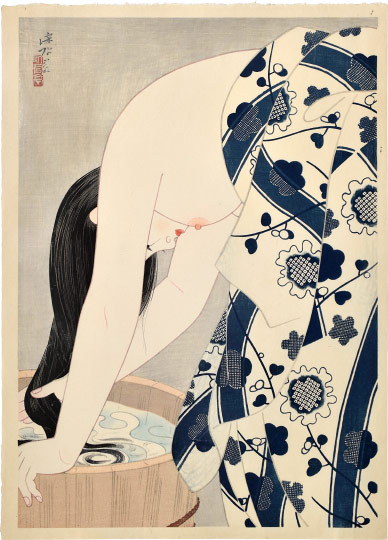 Scholten Japanese Art is pleased to announce the current gallery presentation, Fresh from the Bath, our winter exhibition featuring a selection of woodblock prints illustrating the classic subject of beauties après le bain.

The exhibition evolved as an extension of the theme of the gallery's recent exhibition, Mirror Mirror, which explored the use of mirrors as metaphors or compositional device in Japanese prints and paintings and frequently provided a window (or excuse) to view figures after the bath, dressing, arranging their hair or applying make-up.  This exhibition focuses on the most private aspect of that inner world, the ritual of bathing, and the inherent opportunity to view the bather partially or completely undressed.

Although depictions of idealized beauties (or bijin) were one of the primary subjects of ukiyo-e (lit. 'art of the floating world') for hundreds of years, the exposed body as a subject unto itself was rare in pre-modern Japan. Before Japan opened up to Western influence in the late 19th century, depictions of figures were usually highly stylized presentations promoting changing textile designs, kimono fashions and hairstyles.  Even erotic prints and paintings (shunga, lit. 'spring pictures') tended to emphasis the removal of clothing in the throes of passion as opposed to the absence of clothing. The naked body itself was not necessarily scandalous or even as exciting as the suggestion of an opportunity to reveal a fully-clothed body from beneath gorgeous robes.

However, by the end of the 19th century, young artists were encouraged to study Western painting and sculpture techniques which emphasized naturalism and realism. Life drawing and nude subjects were introduced along with other Western concepts such as artist as individual creator- a radical departure from the Japanese tradition of the student copying the master. By the second decade of the 20th century artists and publishers began to consider how to recapture the artistic legacy of ukyio-e without succumbing to the temptation of simply reviving familiar formats and themes. The shin-hanga (lit. 'new print') genre emerged in response- woodblock prints utilizing Japanese full-color woodblock printing but with a deliberate influence from modern art.  Although most shin hanga prints tended to focus on images that would resonant with a nostalgic views 'Old Japan' or the traditional appreciation of the idealized bijin and her accoutrements, some artists explored the modern sensibilities (and the Japanese limits) by depicting bijin as nudes. 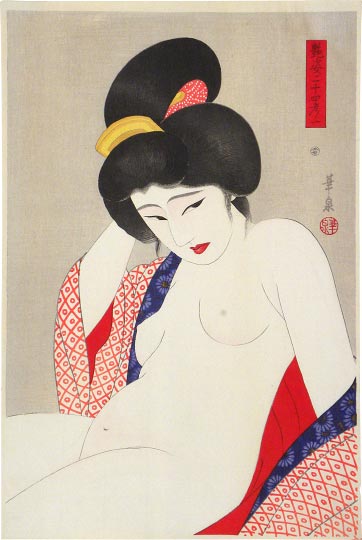 The exhibition will be on view by appointment at the gallery from November 9 – December 14, 2018.