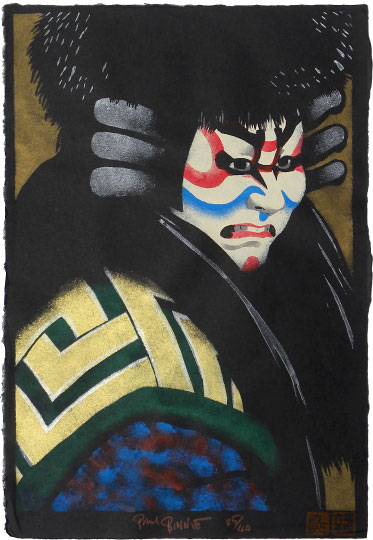 This composition is the first print in the series Kabuki juhachiban (The Famous 18 Plays) and depicts the titular character from the play Kagekiyo (Kagekiyo). Kagekiyo is a general of the Taira clan during their legendary war against the Minamoto armies. Following the Taira defeat at the Battle of Danoura, he becomes a captive. He feels a great sense of shame at his and his family's treatment by his Minamoto captors, and soon rebels. The general throws a massive stone at the guards and wields a great beam of wood until his foes yield. The play ends with the imposing character, dressed in aragato style and speaking with a loud, booming voice, standing triumphantly with the wooden beam held above his head.

Contrary to the order presented in Dialogue with a Past, this composition was the first design in the Kabuki juhachiban series. Initially Binnie expected to produce the series in editions of 40 impressions, but once he completed the first group he changed his mind and decided to extend the edition for this print the rest of the series to 80 impressions. This early impression also varies slightly from later impressions which have additional kanji printed in silver pigment on the shoulder.