Ryo Iida Asian Art and Scholten Japanese Art are pleased to present their second exhibition together: Kitaoji Rosanjin (1883-1959): From the Kitchen to the Kiln, featuring works from the collection of Edoya, Tokyo.

Kitaoji Rosanjin is respected as a multi-talented artistic genius of the 20th century, the self-proclaimed 'greatest master' expressed himself in several media including calligraphy, engraving, painting, lacquer and perhaps most famously, ceramics. The show includes over 20 ceramics pieces together with one woodblock printed self-portrait. 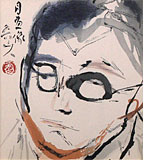 Throughout Rosanjin's career: working in calligraphy, painting, engraving, lacquer and pottery, he never had a formal mentor. Although the concept of a financially successful self-taught artist may not be particularly shocking here in America, in Japan (particularly in the earlier part of the 20th century), it was a far more extraordinary feat. In 1896 at the age of thirteen, Rosanjin applied to, and was rejected by, the Kyoto Municipal Art School. Not to be defeated, he shortly thereafter submitted several works to an art contest where his calligraphy won first, second and third prizes. The award money provided the determined artist a means of purchasing supplies, and he continued to submit works to other contests. Within three years he was earning a living painting Western-style signs.

After a two year stint in Korea working for the Korean government's printing bureau, Rosanjin returned to Tokyo in 1910 and worked for magazines providing cover calligraphy. By this time he was becoming increasingly well-known and he acquired various patrons, including the wealthy cotton merchant Naiki Seibei who offered emotional and financial support, finally allowing Rosanjin to begin to indulge in his great love of fine food- a passion he had from his childhood.

Rosanjin was inspired to work in clay by his deeply held belief that "delicious food requires plates of a comparable level of beauty." During a visit with the Hosono family in Kanazawa in 1915 (Taisho 4) he was struck by the fine food presented on marvelous dishes. This prompted him to visit near by kiln (Suda Seika) where he first demonstrated his talent in pottery. 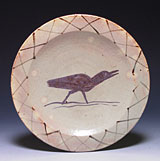 His new wealth allowed him to collected enormous amounts of antique works and paintings. His collection grew quickly, and he opened an antique store, Taigado Art Shop at Kyobashi, Tokyo, which became well-known for his beautifully prepared and presented foods (later in life Rosanjin was famously quoted "Dishes are the kimonos of good food"). In response to the frequent visitors seeking his hospitality, he devoted the second floor of the store to a gourmet club, the Bishoku Club. The success of the club led to his role as the komon (advisor) of one of Tokyo's finest restaurants, Hoshigaoka Saryo (Star Hill Tea Place) which opened in 1925. 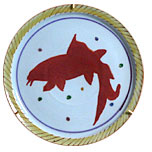 When Rosanjin was unable to locate sufficient pieces which he felt were worthy of presenting the fine food at the Hoshigaoka Saryo, he decided to make them himself and opened the Hoshigaoka kilns at Kita Kamakura, on the hillside of his rural property. Unlike his contemporaries such as Hamada Shoji, who embraced a style influenced by his location (and the clays and firing techniques of the area), Rosanjin never limited himself by his region or materials. He worked in all kinds of clay, low-fire pottery, stoneware, and high-fire porcelain (even importing clay from Korea); he used under-glazes, over-glaze enamels, and ash glazes. During WWII, when the firing of kilns were prohibited, he worked in lacquer.

His large collection of antique porcelain and pottery influenced his own work; but he did not produce replicas, he transformed shapes and palettes to satisfy his own eye. His calligraphic brush adorned the clay just as assuredly as if he were working on silk or paper.

In addition to deriving inspiration from antique objects, he also associated with other artists: he visited both Chagall and Picasso in Vallauris, France (the location of the Madura Pottery where Picasso fired his ceramics). Rosanjin's meeting with Picasso was a near disastrous encounter when Picasso offended his visitor by expressing little interest in a ceramic piece Rosanjin had brought as a gift, but great appreciation of the beauty of the paulownia wood tomobako which contained the gift. Isamu Noguchi visited Rosanjin several times, and in 1952 spent a year with Rosanjin who allowed Noguchi to use the Kita Kamakura kilns.

From the Kitchen to the Kiln includes over 10 different types of ceramic ware such as Oribe, Shino, Iga, Bizen, Seto, Kutani and more; and several works display his painterly skills.

The exhibition opens Monday, September 19th and continues through Friday, September 30th. Scholten Japanese Art, located at 145 West 58th Street, Suite 2H, is open Monday through Friday, and some Saturdays, 11am to 5pm, by appointment. To schedule an appointment please call 212.585.0474. For the duration of the exhibition the gallery will have general open hours 11 am to 5pm.