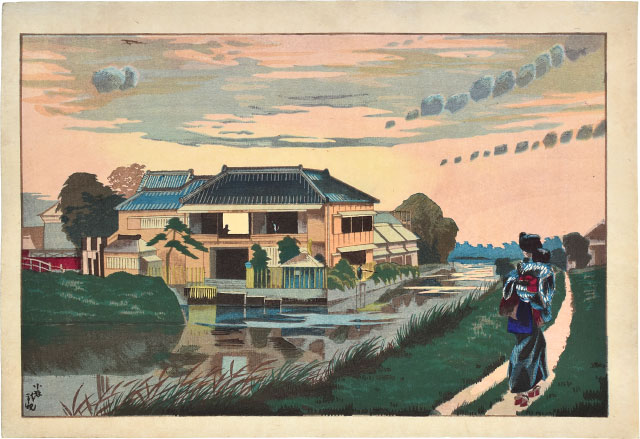 The underside of the line of clouds in the sky are shaded with a distinctive net pattern which Henry Smith discusses pertaining to a famous large-format print by Kiyochika, Cat and Lantern, published by Matsuki in a tiny edition of only a few impressions (although there were subsequent later very small editions) and submitted the First Domestic Industrial Exposition in 1877. The charming composition of a cat cornering a rat inside an overturned and still lit lantern was produced utilizing an ambitious adaptation of Western shading techniques which was intended to demonstrate that Japanese woodblock printing can achieve all of the same visual effects as copperplate and end-grain wood engravings. In 1918, the leading lithographer (and sometimes woodblock print artist) Oda Kazuma (1881-1956) theorized that Kiyochika's use of the net pattern was also in response to its use in color lithography which was increasingly available by that time in Japan.

Although this print bears no publishing information, earlier impressions of this design locate the artist's signature, print title and publisher on the bottom margin. As the series continued in production there was a tendency to simiplify, relocate, or remove superfluous text. As is almost always the case with woodblock printing, each new batch of prints provided an opportunity to tinker with the composition by adjusting the coloration. While earlier impressions with the text along the bottom margin tend to have a paler sky with darker coloration of the foreground which emphasizes the contrast overall, later impressions, such as this one, are notable for the deftly-printed saturated palette blending hues of yellow, peach and pink.