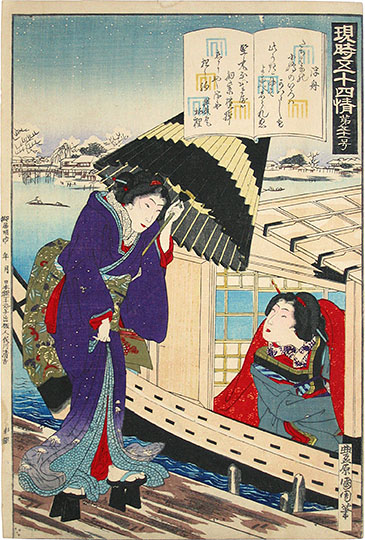 Chapter 51, Ukifune, is one of the most frequently depicted scenes from the classic version of Genji Monogatari ('Tale of Genji'). This late chapter of the epic tale (with a total of fifty-four chapters) centers on the love triangle between Prince Niou (son of the Akashi emperor), Kaoru, (recognized as the son of Genji but is actually the son of Genji's wife the Third Princess and an affair with Kashiwagi), and Ukifune, the daughter of a governor who had a brief affair with Genji but is later seduced by Prince Niou. Classic compositions depict Ukifune in a boat with Niou who brings her to the Islet of Oranges in a heavy snow. This print depicts a fashionable woman, probably a courtesan, protecting herself from falling snow with an umbrella as she prepares to join another beauty waiting dockside in a small ferry, presumably en route to an assignation.