index of the exhibition
NEXT 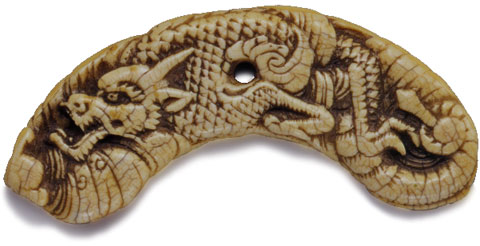 a flat arch-shaped section of ivory carved with a dragon undulating among swirling rain clouds, the tip of its tail coiled into a tight knot from which emerges a halberd blade, the reverse with a beautiful curling wave pattern with a single leg and claw emerging from a vortex, with simple central himotoshi

It is believed that netsuke began to be used in Japan in the 16th century; as the country became unified and more stable, cities like Kyoto, Osaka and Edo became thriving metropolises where a townsperson would need an attractive yet practical way to carry necessities such as money and tobacco pouches. Early netsuke were more utilitarian than decorative; simple sections of a material such as wood or ivory, with some sort of means of passing a cord through- either a natural or drilled himotoshi. Simplicity eventually gave way to personal expression: small Chinese ivory carvings were converted to use as netsuke, and the Japanese began producing carvings with an eye towards fashion as well as function, producing more compact compositions with unobtrusive himotoshi.

This carving bears many hallmarks of an early netsuke. The classical subject and bold carving of a dragon amongst the waves, the simplicity of the shape and the unhidden himotoshi, the apparent age and wear of the material itself, all indicate this is likely a rather early netsuke.