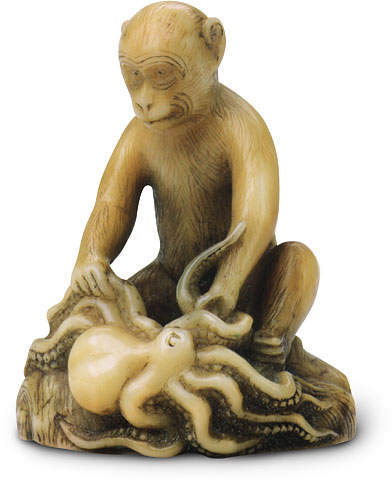 the monkey perched on an outcropping rock holding the tentacles of a small octopus which clings to the side, finely carved with delicate hairwork, the outer rings of the ivory well-utilzed to give the back of the monkey distinctive coloring; signed on underside, Garaku

This netsuke references a legend in which the octopus-physician to Ryujin, the Dragon King of the Sea, prescribes a monkey's liver to heal the King's daughter, but the monkey outwits a jellyfish sent to capture him. In this carving the monkey, with a very human-like bemused expression, seems to have the situation well in hand. There seems to be little danger that the octopus will have any success in securing his prey.