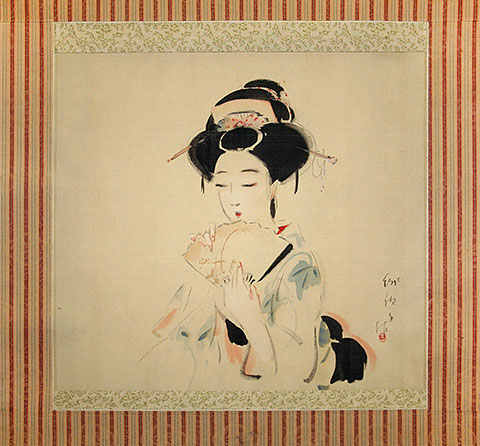 Born in Kyoto, Kajiwara Hisako came of age at a time when the old ways of the Meiji Period (1868-1912) were beginning to give way to modern (and radical) social concepts. Although a higher education was not available to most Japanese girls, Hisako's family was able to afford to send her to a high school for women (jogakko) where she developed an interest in poetry and painting, and where she was likely exposed to emerging ideas which rejected traditional beliefs of feudal Japan. Influenced by the women's liberation movement, Hisako ultimately decided to forego marriage in order to pursue an artistic career. Hisako studied first under the painter Chigusa Soun (1873-1944), and later under the painter and print designer Kikuchi Keigetsu (1879-1955).

Hisako established herself as a bijinga artist during the Taisho period (1912-1926). In 1920 she began submitting her works to the Teiten, which were exhibited, but not entirely appreciated. Her paintings tended to push the subject beyond the static idealized beauty. Her bijin were often individuals, not only from the floating world of entertainers, but frequently from the working classes as well. Critics found her realism was unsettling; her paintings were not awarded prizes and few institutions acquired her work at the time, a small number were sold to private patrons.

In the later 1920's and 1930's, Hisako began producing works which were more in tune to the increasingly conservative and nationalistic climate of the country. Her own father's bankruptcy in 1929 surely would have further encouraged her to move away from controversial subjects and focus on uri-e (paintings exclusively for sale). After World War II, Hisako shifted again, although she did not return to the sympathetic portrayals of realistic women of her earlier career, her post-war women were modernized with contemporary Western clothing.