Echoes of Japan: the Woodblock Prints of Paul Binnie 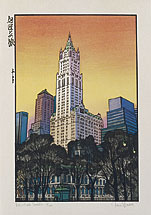 Paul Binnie, a Scotsman living in London, has over the past 15 years become one the most important artists working in the Japanese tradition of woodblock printmaking. He has taken up the mantel of the shin-hanga ('new print') artists of the early to mid-20th century, producing works that can only be described as innately Japanese. Scholten Japanese Art, recognizing his importance in that genre, is very pleased to represent Binnie in New York.

The exhibition will mark the first time Scholten has chosen to devote an entire exhibition to a living artist, as well as the first time the gallery has commissioned a work from an artist. For his inaugural show at Scholten, Binnie will release two new woodblock prints of a most-appropriate subject, 'New York' (an image of the Woolworth Building) which is the newest installment for his series, 'Travels with the Master', an ongoing homage to his favorite Japanese print artist, Hiroshi Yoshida (1876-1950). The New York print will be offered in two color palettes, 'Sunset' and 'Night.' As is the artist's prerogative, images of the print will not be made public until the entire edition is completed.

In addition to the New York prints, Scholten will display a selection of early and recent Binnie works, including his kappazuri (stencil prints), actor portraits, tattoo subjects, landscapes and beauties. (Scholten will also tap into their large inventory of classic Japanese woodblock prints and display two works by Katsushika Hokusai 1760-1849) from the 'Waterfall' series which Binnie incorporated into one of his own designs from his 'A Hundred Shades of Ink of Edo' series.

Scholten Japanese Art will be hosting an evening event in the presence of the artist on Saturday, November 22nd from 6:00 until 8:00 pm where Binnie will be available to discuss not only his print work in detail but also its connection to the print art of the past three centuries. This will be a rare chance to meet in person an established and experienced Japanese woodblock print artist who can explain the technical aspects of this most demanding of art forms.

The exhibition opens Monday, October 27th, and continues through Tuesday, November 25th. Scholten Japanese Art, located at 145 West 58th Street, Suite 6D, is open Monday through Friday, and some Saturdays, 11am to 5pm, by appointment. To schedule an appointment please call 212.585.0474.

For the duration New York Print Week, October 27 — November 1, the gallery will have general open hours (no appointments needed) Mon. - Sat., 12 to 5pm. For the remainder of the exhibition (until November 25th), please schedule an appointment.