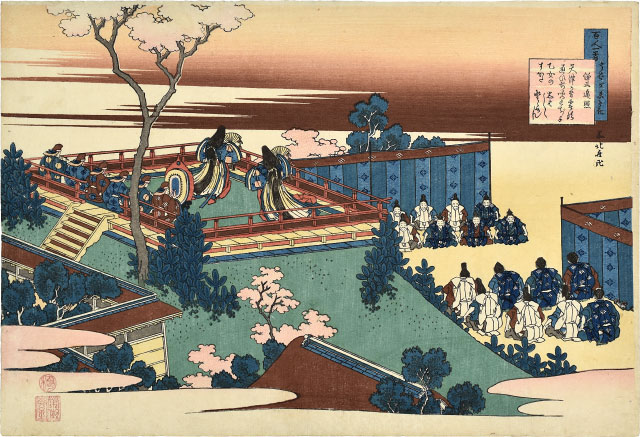 The poem is by Sojo Henjo (Yoshimine no Munesada, 810-850), a first cousin of Emperor Nimmyo who became a monk, taking the name Henjo, and later became a bishop (sojo). The poem dates from his years as a courtier.

O ye winds of Heaven
In the paths among the clouds
Blow, and close the ways
that we may these virgin forms
Yet a little while detain


The poem seems to refer to an autumn rice harvest festival which was celebrated in the courts with a dance performed by unmarried daughters of the nobility. Munesada likens the dancers to angels, who can only fly through cloudless skies, willing that the clouds close the skies and keep the lovely dancers here on earth a little longer. While the palette of the print is autumnal, the trees have been colored the pink of cherry blossoms, perhaps an example of misinterpretation which can be attributed to the nurse.

Scholten Japanese Art is open Monday - Friday, and some Saturdays, 11am - 5pm, by appointment.

Contact Katherine Martin at
(212) 585-0474 or email
kem@scholten-japanese-art.com
to schedule a visit.