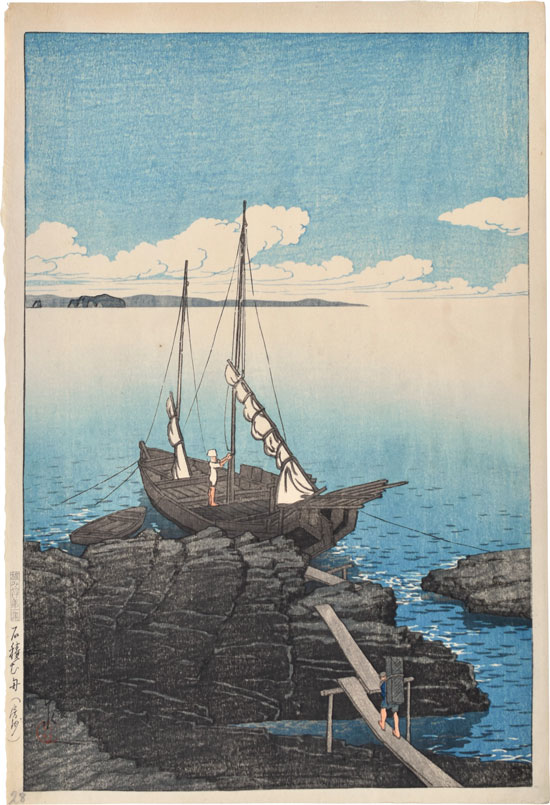 After publishing his first three trial prints in 1918 with Watanabe Shozaburo (1885-1962), Hasui quickly established a travel regimen to produce sketches that could be worked up into compositions suitable for the woodblock print format. In 1919 he embarked on what would become an annual sketch tour, visiting northern Japan, including Sendai, Hachinohe, Lake Towada, Aomori and Shiobara. The northern tour provided the subjects for the first six prints in a new series, Souvenirs of Travels, First Series, which was launched in 1919 by Watanabe who also began publishing a series of local views, Twelve Scenes of Tokyo in the same year. Hasui spent the following summer near Tokyo on the Boshu Peninsula in Chiba Prefecture, which he illustrated in two more designs, including this print, for the Souvenirs of Travel series published in 1920.

The Souvenirs of Travel series included sixteen designs published between 1919 and 1920. Depicting illustrations of views from around the country, the series was similar in concept to the sketch-tour books which flourished from 1905 until 1920 but expanded on the theme by elevating the works into single-sheet woodblock prints. Many shin-hanga artists participated in sketch-tour publications, but the book format was ultimately supplanted by the shin-hanga movement.