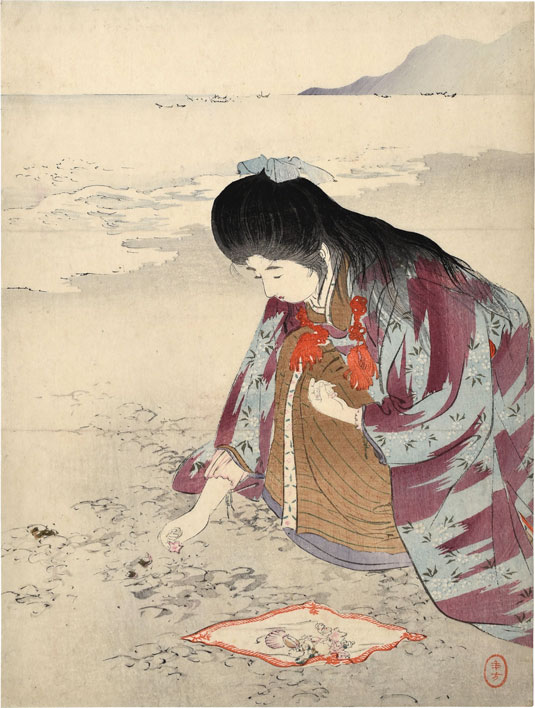 Mizuno Toshikata, born Nonaka Kumejiro, was born in the Kanda district of Edo in 1866 during the final years under the Tokugawa shogunal government. His father, a plasterer, and his stepmother were strict and raised him to have a strong sense of responsibility and work ethic. He entered the atelier of the (last) great ukiyo-e artist, Tsukioka Yoshitoshi (1839-1892), at the age of fourteen. Later his father pulled him from the studio, worried that the master's notorious reputation for self-indulgence would be a bad influence on young Kumejiro. After a period of painting ceramics, he returned to Yoshitoshi who gave him the go (art name) Toshikata, taking the toshi from the second character of Yoshitoshi, and named the young disciple as his successor and future standard-bearer of ukiyo-e. In contrast with his predecessor, Toshikata was a serious (and sober) teacher who pushed his students to excel beyond him. His followers include Ikeda Terukata (1883-1921) and his wife, Ikeda Shoen (1888-1917), Hirano Hakuho (1879-1957), and Kaburaki Kiyokata (1878-1972), the artist who taught many stars of shin-hanga.

Toshikata was disciplined with his time and kept up a prolific output. He was the staff illustrator for the newspaper Yamato shimbun from 1887-1904, producing daily sashi-e (inserts). From the period around 1890, he also designed lithograph illustrations for the magazine Shinshosetsu and kuchi-e for novels for publishers including Hakubunkan and Shun'yodo and forty-eight kuchi-e for the popular literary magazine Bungei Kurabu. Toshikata also produce bijinga print series for Akiyama Buemon of Kokkeido including, Thirty-Six Types of Beauty (Sanju-rokkasen) in 1891, Present Day Beauties (Imayo bijin) in 1898-99, and two fashion series for the Mitsui (and renamed Mitsukoshi) department store, Brocade Prints of the Capital (Miyako no nishiki) in 1898 and 1905-06. Sadly, Toshikata died in 1908 at the age of only 42, reputedly from over-work.

This print accompanied volume 11, no. 4 of the Bungei Kurabu magazine as a decorative frontispiece, not asociated with a particular article or story in the issue.