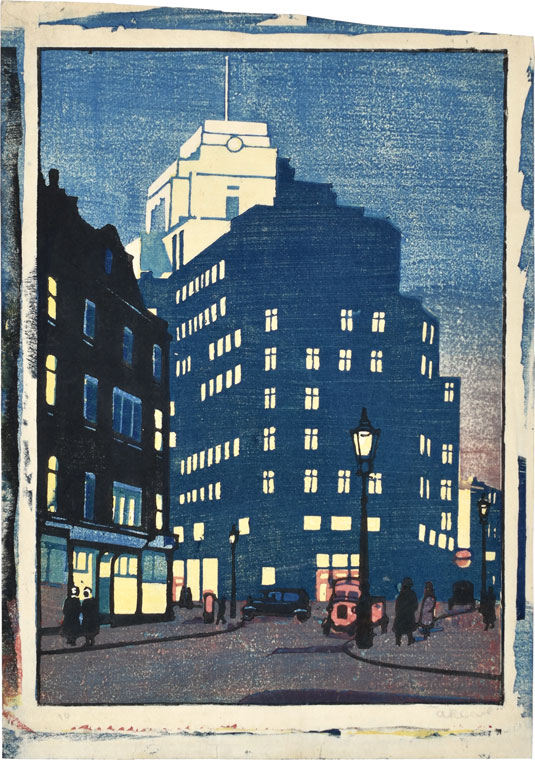 color woodblock print; numbered in margin at left, 10, and signed to the right, areeve, ca. 1932

Born in London, Agnes Reeve (maiden name Ferard), studied art from a young age. She attended drawing classes first at the Academy School and later at the Slade School, briefly, before her parents discovered the drawing classes offered live nude models. While attending the Byam Shaw School of Art, an independent art school, Agnes became interested in printmaking, initially color woodblock printing. Agnes married Captain Norman Reeve in 1922 and their first son Tim arrived in 1923 (a second son Michael joined the family fourteen years later). After a period abroad during which the Reeves lived in Germany and in India, they returned to England and settled on Bramerton Street in Chelsea. Agnes joined the Chelsea Art Society and began producing linocuts featuring locations in London and Suffolk. She exhibited with the Chelsea Art Society and the Federation of British Artists and won the Stock Exchange prize for one of her linocuts. In the year of her passing there was an exhibition of her work "Chelsea & London, Agnes Reeve 1896-1984" at the Chelsea Library in the Town Hall with sale proceeds donated to the Agnes Reeve Memorial Fund for Artists which underwrites a coveted prize in her name prize awarded annually by the Chelsea Art Society to the creator of the best painting featuring London.

Reeve produced both woodblock and linocut prints, in this case the pigment appears to be water-based and the application indicates that this is a color woodblock print, which corresponds to the understanding that she moved into linocut printing after the Second World War. Reeve prints in any format rarely surface on the market as the editions were quite small, for example, a recorded impression of 'Piccadilly Circus' is numbered from an edition of thirty, and one of 'Hyde Park Corner' is numbered from an edition of only ten, as may be the case with this composition.

The subject of this print is the BBC Broadcasting House, an iconic example of art deco architecture which was designed by George Valentine S. Myer (George Val Myer, 1883-1959). Construction began in 1928 and was completed in 1932.