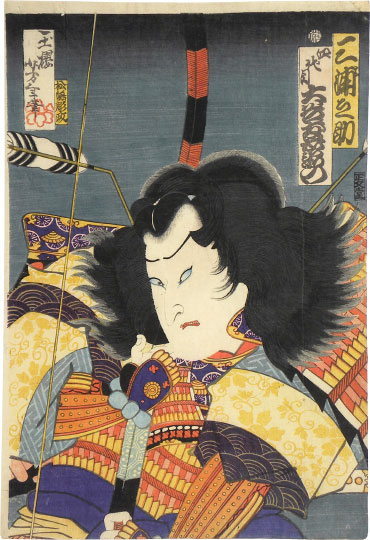 The actor Otani Tomoemon IV (1791-1861) is imagined here in the role of Sakamoto Miuranosuke Yoshimura from the play Chronicle of Three Generations in Kamakura (Kamakura sandaiki). This portrait was issued in the 7th lunar month of 1865 to remember Tomoemon IV as his second son Tomomatsu (1833-1873) was assuming his father's name and debuted in Edo as Otani Tomoemon V in this role in the following month.

Miuranosuke and his betrothed, Princess Toki, are living in the village of Kinugawa in the home of his ailing mother, Nagato. However, the marriage arrangement is fraught with uncertainty. Miuranosuke is an enemy of Toki's father, Hojo Tokimasa, and therefore has doubts whether he can trust where his fiancée's allegiances lie. One night, two of Tokimasa's retainers come to Nagato's house to convince the Princess to murder Nagato and return to her father. Unswayed by their treaties and steadfast in her love, the Princess resolves to kill herself as proof of that commitment. Miuranosuke intervenes, and together they come to the decision that if they are ever to live in peace they must murder her father. Unfortunately, but not surprisingly, their story ends in tragedy. Word of their plot precedes them as they make their way to Tokimasa's mansion, and in response the compound is well-guarded. Toki is brought before her father, while Miuranosuke is faced by an overwhelming force on the mansion grounds. Miuranosuke becomes fatally wounded, and cuts off his own head. Facing her unforgiving father and devastated to hear of the death of her lover, the Princess kills herself with a dagger.