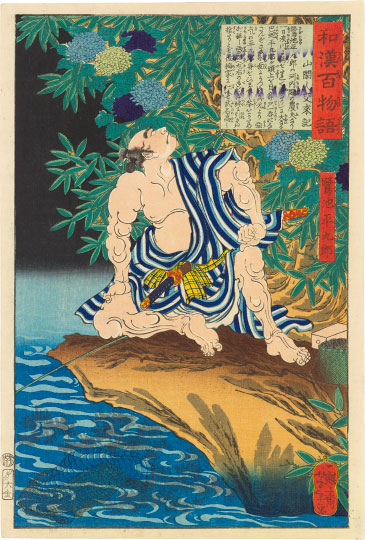 The following text is written beside the series title cartouche:

written by Sankanjin Korai
Sagiike Heikuro was a farmer of the Kawachi region [present-day Osaka prefecture]. One day, while he was fishing by a mountain stream, he saw the reflection of a large snake in the water just as it was reaching down to swallow his head. By nature a courageous man, Heikuro clenched his fists, turned round, struck the snake and stunned it. Then he seized the snake's jaws with his hands, split the snake in two, and threw it aside. Later he served the Nan family and became known for his acts of bravery.

Sagiike (also known as Sagi-no-ike) Heikuro sits on a rock above dangerous waters. Heikuro is a central character in the 1821 historical novel Illustrated War Career of Kusunoki Masayuki (Kusunoki Masayuki senko zukai), though it is uncertain whether or not he was based on a historical counterpart. The explanatory cartouche identifies him as a farmer, which he was as a young man. However, due to his exceptional ability as a warrior, evinced by his courage in this confrontation with the snake, he was adopted by a powerful clan and made a trusted retainer. Among his most memorable episodes as a samurai, Sagiike engaged in a wild tussle with a badger spirit, and was credited with decapitating seventeen enemies at the famous Battle of Minato River in 1336.