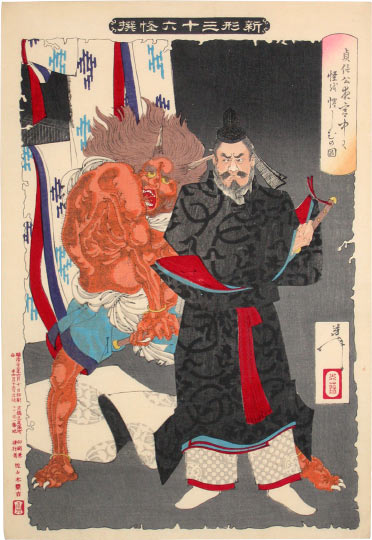 Fujiwara Tadahira (Fujiwara Sadanobu; 880-949) was a 10th-century minister who dutifully served both emperors Daigo (897-930) and Suzaku (ruled 930-946) from 914 until 941. In this episode, taken from the 1119 history The Great Mirror (Okagami), Tadahira is disrupted by a hairy demon on his way to an appointment at the court. Upon feeling the demon grab a hold of his arm, Tadahira shouted "who stops a man on his way to the council chamber with an Imperial decree? You will regret it if you don't let go." Intimidated by the forcefulness of the remonstration, the demon hurried into the night, and Tadahira continued on his way.