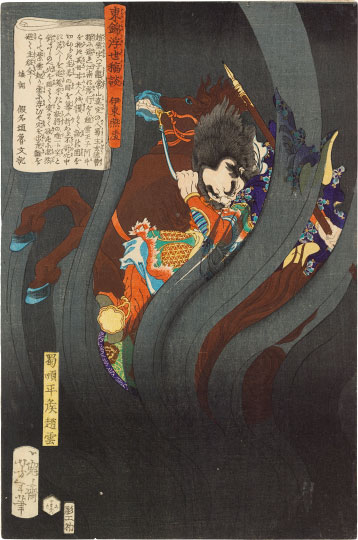 Depicted here is Zhao Yun, Marquis Shunping of Shu (Shoku Junpei-ko Choun), from a story retold by Ito Enryu (possibly Enryu II, 1801-1855), based on the legendary hero from the early Three Kingdoms Period (184-280) in China. He was a close companion of Liu Bei (161-223; Jp: Gentoku), and is depicted here riding his horse through smoke to rescue Liu Bei's infant son during the Battle of Changban in 208. In the midst of the battle, Zhao Yun mysteriously rides off, prompting some to suspect he had surrendered. However, Liu Bei refused to believe that his most trusted ally would abandon him at such a time of need. He was reward for that faith soon thereafter as Zhao Yun returned with his son who he had rescued from the fray.