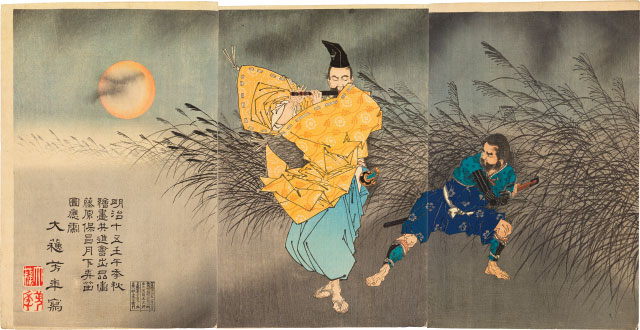 Fujiwara Yasumasa (958-1036) was a famous musician at the Heian court. He and his brother, Kidomaru, had parted ways when Kidomaru became an outlaw rather than serve under the powerful warrior Raiko (948-1021). This print illustrates an episode made famous in a kabuki play where Kidomaru, attempting to rob his brother of his robes, is entranced by Yasumasa's flute playing and leaves his brother unmolested.

This subject was not new to Yoshitoshi. His mentor Utagawa Kuniyoshi (1797-1861) as well as Utagawa Kunisada (1786-1865) designed prints based on this scene before Yoshitoshi first approach it in 1868 with a different triptych. Yoshitoshi returned to the subject, albeit in the abbreviated form of a background cartouche within a half-length portrait of a courtesan, in 1879, and then again with a large painting he submitted to the first government Exhibition for the Advancement of National Painting (Naikoku kaiga kyoshinkai) in 1882. After viewing the painting, the publisher Akiyama Buemon commissioned Yoshitoshi to adapt it to a woodblock print format the following year. Five years after designing the triptych illustrated here, Yoshitoshi condensed the scene in a single oban-sheet in his One Hundred Aspects of the Moon series. This version, known as 'The Flute Player Triptych,' is generally considered his greatest masterpiece.

According to the analysis of the many variations that were printed of this design in the 2011 exhibition catalogue of the Freis collection, this impression corresponds to the 'variant first state: seal type A' distinguished by nuances in the shape of the artist's seals, the manner in which the reeds are printed, and the dark yellow color of Yasumasa's cloak.