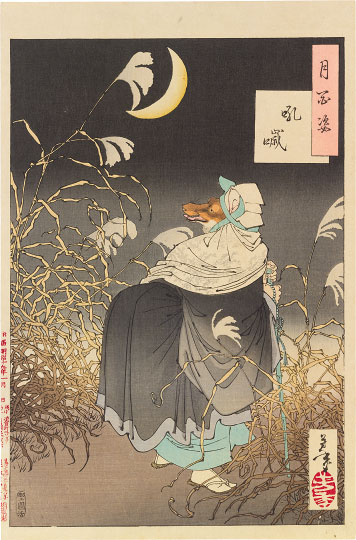 One Hundred Aspects of the Moon: The Cry of the Fox
(Tsuki hyakushi: Konkai)

The story of a shape-shifting fox is the subject of the kyogen drama The Cry of the Fox (Konkai). Kyogen were short, humorous interludes staged between the acts of a Noh play. In Konkai, a hunter is visited by his uncle, the priest Hakuzosu, who lectures his nephew on the evils of killing foxes. The hunter is convinced and the priest departs. However, at that moment the hunter hears a fox's cry and realizes that his uncle had been a fox in disguise all along. According to Japanese folklore foxes had the power of transformation, a power often used to serve their crafty ends.